skip to main | skip to sidebar

Thoughts on My Vacation / Holiday etc 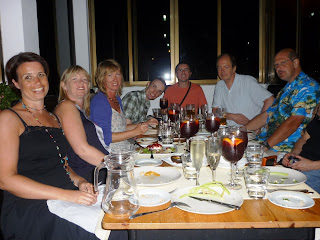 My previous holiday had been in September 2007 with Spice UK. I went to Club La Santa in Lanzarote (Canary Islands). I was very apprehensive before I went but I had a great two weeks. I got on well with the other people in the group. I determined that I would go back in the future.

I returned to Club La Santa with Spice on Oct 14th on the holiday which is now one week. I have been suffering from a lot of anxiety this year, most likely due to the medication that is supposed to help me. It does help me sleep. I was really doubting whether I should go to La Santa, right up to the day before the flight, maybe even up to the morning of the flight. Thanks to a chat with a friend, I made it. I met seven others at the airport and I was less apprehensive. I didn't really relax until we got to the resort. I had a bedroom to myself in a four-bed sports apartment. It was not huge but it was my own space. I chose to go single occupancy because my sleep pattern can be a bit strange. The other three bedrooms had another single guy and two couples. We all got on very well. By the morning after arrival, I had already met 12 of the 24 others in the group. I knew the coordinator from my last visit, so that made 13. I met the others over the week. There was only one person from the previous holiday but it didn't matter. Everyone got on well and had a great week. Some were very sporty and did lots of stuff. Others, like me, did what they could. By the end of the week, I was more relaxed than I have been in years, probably since I was there last time.

I learned one big lesson. Even though I have been isolated for a long time, I can still get on well with people "face to face". I thought I had turned into someone who only relates to people electronically. It has been a shock coming back to an empty (cold) flat. I am not so lonely now. I am keen not to slip into such isolation again. I am sending off an application form for voluntary work. I spent 6 weeks at the same company on a work placement, so I am quite hopeful. I also need to find some other activities where I meet people. My slimming group has been a life saver over the last 19 months. I will continue to go when I can even though I have reached my target weight.
Posted by CliveWild at 00:49 No comments: